My taxi broke down at BKE!

​I was cruising around Bedok North after my meal break at a coffeeshop opposite Bedok Stadium. It was a lazy quiet half past noon when my MDT sounded. Managed to bid for a call at Bedok Reservoir View. Arrived within 5 minutes and picked up a mother and son. 2 locations she said – send my son to a school at East Coast and then off to Cashew MRT station. On the way to that well known school, mother was chatting with her son about his exams giving advise. As usual, when my passengers either busy talking on the phone or among themselves, I would lower or off the radio. I would keep my eyes and ears open but my mouth shut concentrating on my driving.

After dropping the son off, the mother continued her chatting with me. She was comparing her time in school with her son. After all, her son is not so brilliant academically but a sensible and obedient boy. She is worried about her son not able to cope with our highly competitive education system. I told her that we got no choice. We need to bring out the best in each child cuz we got nothing but only human resources. If you look at Korea, Japan, Hong Kong or even China they are much worst. In order to sustain our economy, we must develop each child to his/her fullest potential. Of course, not every child is equal. We agreed that as parents, we need to manage our expectations of our children within the competitive education system when our conversation inadvertently turned to the Primary 5 school boy’s tragic death as a result of high parental expectations. She also mentioned another brilliant student from a top school taking his own life when he missed his S paper!

All of sudden, I heard a loud click and tock with the taxi losing momentum and power at the 2nd bend of the slip road after the PIE exit to BKE. Gradually, my taxi grind to a halt on the middle of the 3-lane highway. I tried few times to restart but to no avail. I immediately switched on the hazard lights and my immediate concern was for my lady pax to get to her destination on time. She had taken half day leave to accompany her son to sit for the exam and now she’s rushing back to work. She had to get to Cashew MRT station by 1330 hrs to catch the shuttle bus to her office at Bukit Gombak. If she missed the company bus, she had to walk quite a distance to her office. Outside transport not allowed to access the company premises.

From my rear view mirror, I could see 4 or 5 taxis amongst the many vehicles started forming up behind. When I saw one green lighted taxi, I quickly got out to give instruction to the TransCab taxi driver requesting him to send my lady pax to Cashew MRT station and that she was rushing for time. The TransCab driver gladly obliged. When I got back to my taxi, I told my lady pax to hurry and grab that waiting taxi cuz it’s nearly impossible flagging a taxi on the highway. When she enquired about the fare, I said forget it. I apologized to her for the inconvenience which is beyond my control. She insisted on paying and threw 3 pieces of $10 note onto the front seat and ran out to the waiting taxi next to mine. The fare was less than $20. Before I could refund her, she already left in that taxi. 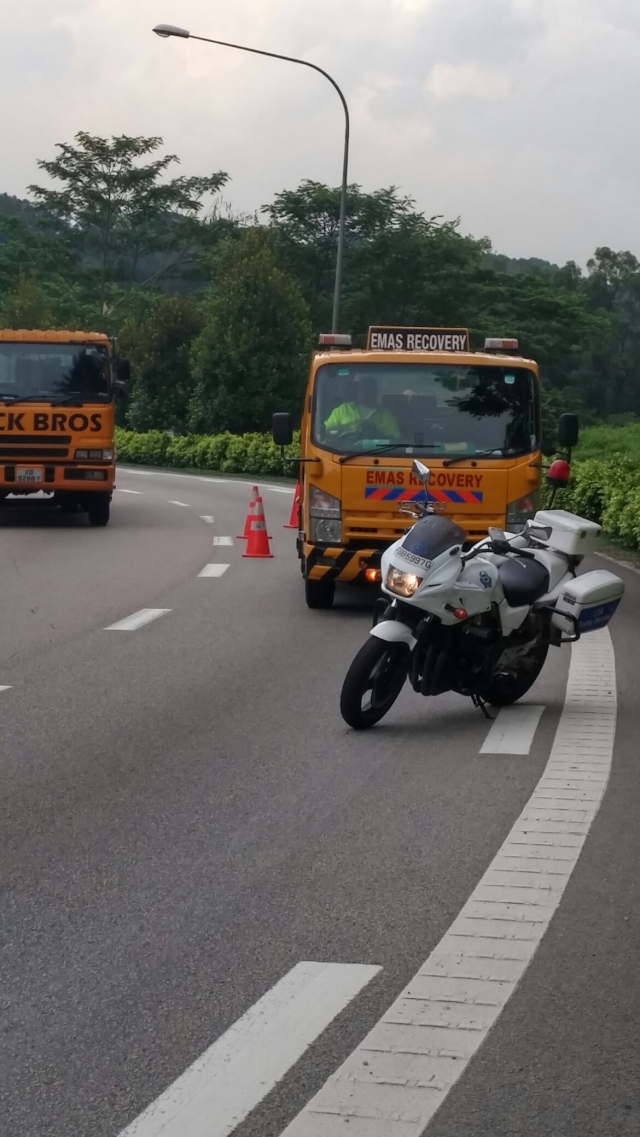 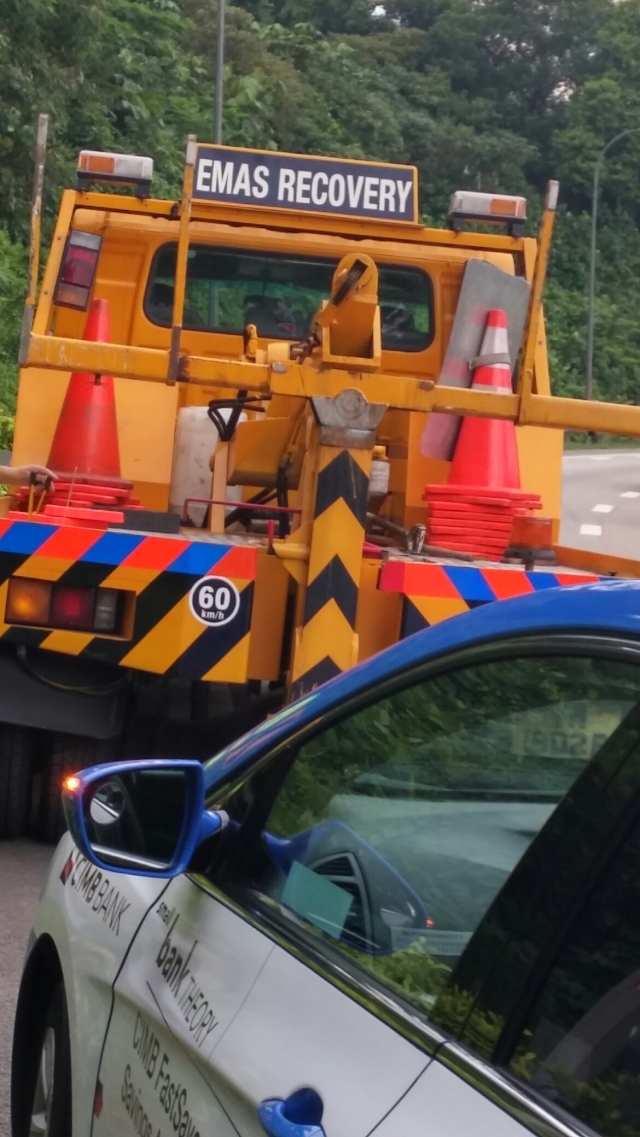 Whilst contemplating my next move, someone knocked on my window. A handsome young Malay biker with his 1000 cc Yamaha sports bike parked just behind my stalled taxi asking what happened. He offered to assist me to push my taxi to the road shoulder as it was causing obstruction. I told him forget it cuz it’s up gradient and not easy.

But his kind offer of assistance was so sincere and he said let’s try. I then put the gear to neutral and the taxi started rolling backwards. His equally beautiful young wife in Tudang hurriedly tried to stop it from sliding further. I ran out to assist. We then realized that someone needed to control the steering wheel to bring it to the side of the road. The radiant wife volunteered for the task. But the 2 of us could only stop it from rolling backwards. We could not even move an inch. At this juncture, a small lorry whisked passed and parked at the side of the road ahead of us. A Chinese man in his early 30s in sky blue overalls came over to assist. Yet another Chinese man in long sleeve shirt in a luxurious sedan – BMW I think parked behind my taxi also came to join us. Now with 4 of us, we could alas manage to push and shove this heap of metal inching against the force of gravity towards the road shoulder from the middle lane of the highway. Surprising, those vehicles on the 3rd lane – extreme left lane stopped to allow us to push the taxi to the side of the road.

For about 10 to 15 minutes on the middle of the busy highway when we managed to push the taxi to the road shoulder there was not a single horn sounded. Those motorists just looked on sympathetically and understood our predicament! In the meantime, more and more vehicles were forming up behind my stalled taxi causing quite a massive traffic jam. When my taxi was moved to the road shoulder, normalcy returned to the highway easing the jam. Those passerby whom assisted me just left as quickly as they had come to render assistance. I shouted my thanks to them and they just waved back! I’m grateful to them.

From 1320 hrs to 1335 hrs – about 15 minutes of high drama on the busy highway with my stalled taxi parked eventually next to lamp post 1171, I quickly took out the triangle breakdown sign to display it at a distance behind my taxi to warn other motorists. I then called up EMAS for assistance. Within 10 minutes, LTA Traffic Marshall ATOES officer came on a bike. When he arrived and assessed the situation, he quickly placed 2 retractable pylons far away from my taxi to warn on coming vehicles and directed traffic.

My taxi was stalled at the “blind” spot on the 2nd bend and it’s quite dangerous. There were few misses when vehicles turned too fast only to see my taxi parked at the bend. They had to jam brakes as they had no time to filter to the other lane due to heavy traffic. That officer was very professional and was most cheerful when I explained to him my situation. He told me his colleagues would be arriving in few minutes. He told me not to worry.

True enough, EMAS tow truck came in another 5 minutes. They were quick and well trained. They knew what to do straightaway. Towing crew Li E/P No: 044 spoke to me in good English only switching to Mandarin when he realized that I’m a Chinese. I can’t blame him cuz many thought that I’m a Malay due to my complexion. Even that Malay gentleman coming to assist me thought I was a Malay when he asked me in Malay what happened? Obviously, Li is a PRC but spoke English quite well. His tow truck driver is a local Malay. Both of them quickly towed away my taxi within 10 minutes to the nearest car park at Diary Farm Nature car park. From there, I requested my company tow truck to bring the taxi back to Loyang workshop.

By the time I left Loyang workshop with all the registration and documentation done, it’s already 1530 hrs. I was told later that my taxi had to undergo major engine overhaul. My taxi is only 2 yrs and 2 months but clocked about 370, 000 km mileage! For the next 2 to 3 days, it will remain in the workshop for major repairs. At least, I could now take a break doing the things I like. That’s why I had the time to blog about my memorable highway experience. I really appreciate those passerby motorists who came to assist me. I’m also impressed by the professionalism shown by the LTA teams i.e. Traffic Marshall and the EMAS towing crew. They are doing an excellent job indeed!

My son commented: “The people who stopped make me feel very warm and feel that there are many nice people around!”

Read another article here and here!

7 Responses to My taxi broke down at BKE!