After a student was fined $400 for using an electrical socket at a station to charge her mobile phone, then only LTA has decided to review the list of penalties on the public who flout MRT rules! It’s always the case of fire fighting. After something had happened, then only they decided to act. Before that, they were sleeping? Or business as usual until someone got hit unjustly or excessively?

Much discussion on this topic is going on in the cyber world. Click here to read. Most of them feel that it is quite unfair to charge the student in court for such a trivial offense with such a huge disproportionate fine. There was no warning sign put up to warn the public not to use the available power sockets in MRT stations. Those power sockets are not locked. They are easily available with easy access. The student was a first timer. A warning or a token fine should be more than sufficient. Those were some of the comments posted on-line. Frankly most of the negative comments are directed at SMRT. I think the latter should not be blamed for it. I’ll come to that later.

Let me congratulate the senior reporter Christopher Tan for putting up this news report after meticulously checking on the authenticity of the news which occurred in August last year. The news appeared on The Real Singapore last Monday (20/1/14) when a netizen wrote in to the site to complain. That story was quickly picked by the eagle-eyed reporter who did a thorough check with LTA and it was confirmed to be true. Due to the efforts of both TRS and the sharp eye senior reporter, LTA has decided to review the list of offenses in MRT premises. If that news story did not surface, do you think LTA would bother to do anything?

A cursory look at the list of offenses could make one laugh! Take the offense “Entering or remaining in train when it is full” Fine is $500. WTF? It really makes my toes laugh. Could LTA pls explain to the public? I’m totally at a loss. 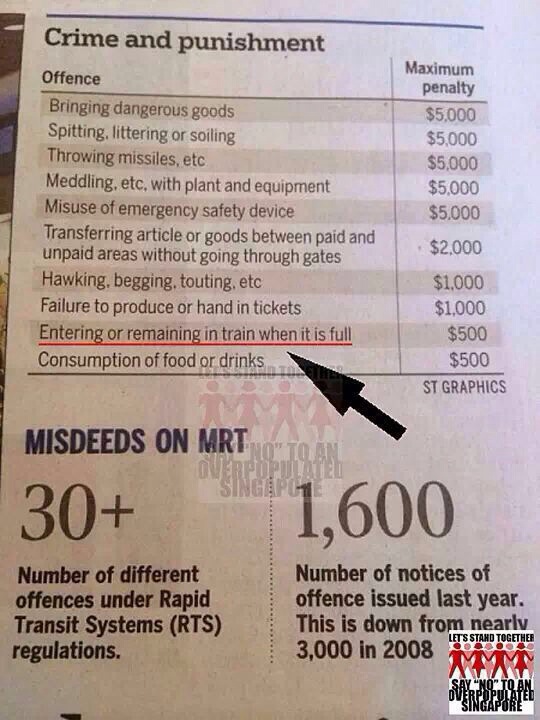 The rules on MRT premises are actually set up by LTA. The latter is also empowered to prosecute offenders. Whether to proceed with prosecution or charge an offender in court lies with LTA. They also have the discretion to waive any charges against the offender. SMRT in this case merely reported the offense to LTA. SMRT like any other transport provider does not have any statutory power to prosecute or waive charges against offenders. To direct all the negative comments on SMRT is not fair or appropriate. The correct target to vent your indignation is LTA.

I am of the opinion that after the student’s case was highlighted by TRS and the main stream media, LTA felt that the fine of $400 against the student was far too excessive. If not, why then they decided to review it? Of course, LTA will die die, mati mati never admit that it’s their fault that such a thing happened. When the compassionate judge realized that the fine would be excessive, he advised the student to appeal against the offense. I believe that the student had appealed to SMRT – the latter would usually forward it to LTA but the appeal was unsuccessful. The judge had no choice but imposed a $400 fine under “Meddling, etc with plant and equipment”. Again, the judge was merciful by just imposing a $400 fine. The max fine is $5,000! Really langgar!

I hope readers are aware which party is at fault. It is LTA that is not exercising its discretion when enforcing such archaic rules. They simply follow by the rule book. Like I used to say CYA – Cover Your Arse. Just follow strictly to the law to the letter and you will never go wrong. No body could touch you! But then they forgot that there is another dimension to the rule of law such as compassion, decency and rationale behind every law. Pls don’t just follow blindly without any due care or consideration for the pain and suffering of commoners such as that student where $400 meant a lot to her. Will they ever understand? 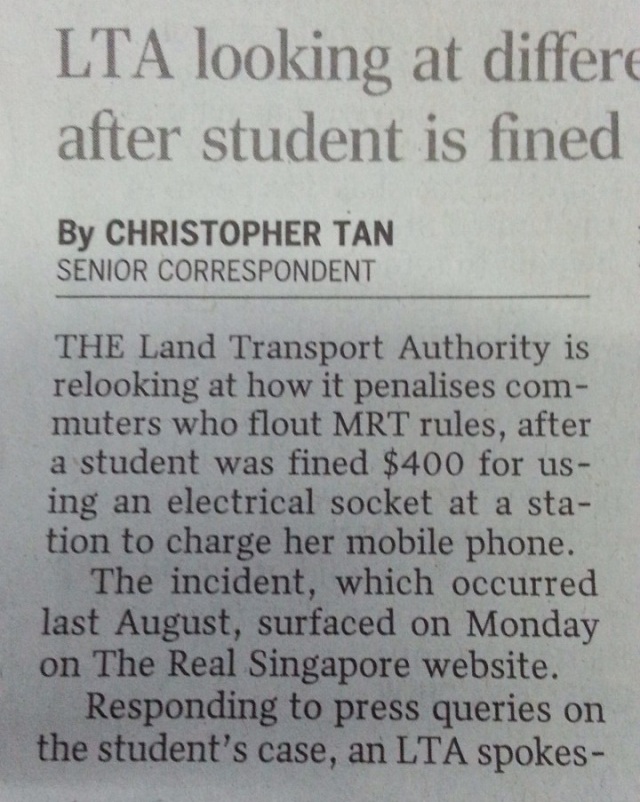 11 Responses to LTA to review list of offenses in MRT?